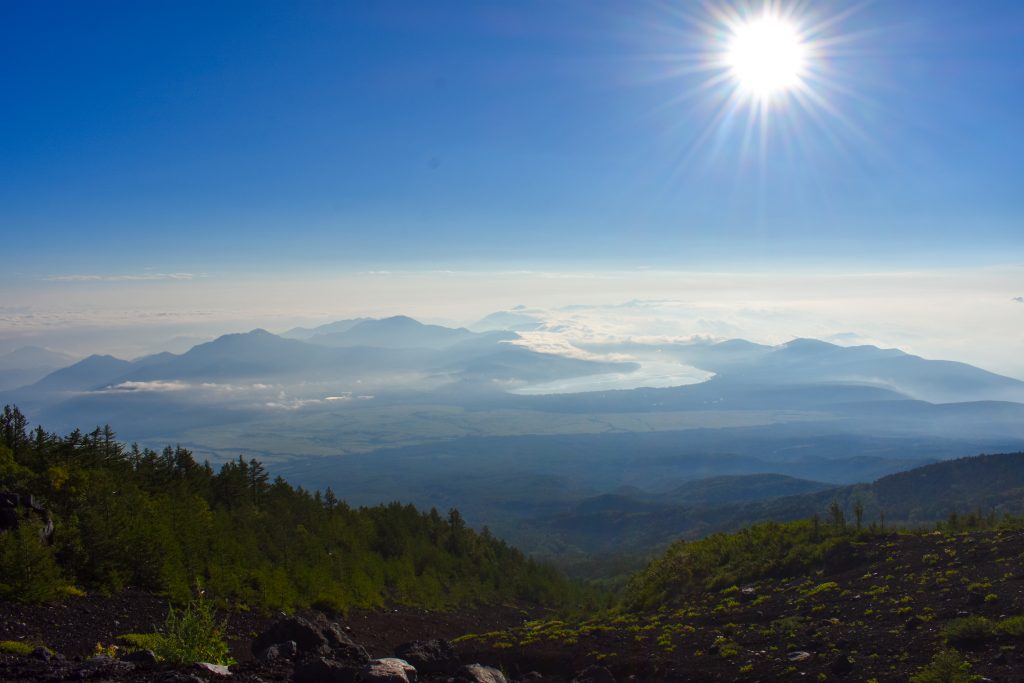 Our experience climbing Mt Fuji was awesome, but it was challenging. Both physically and mentally. We didn’t have any major issues and Andrew and I both made it to the summit. That being said, I did a lot of research beforehand and took precautions.

We left with our tour group from our hotel in Tokyo at 1:45 am. We drove to the 5thstation which took around 3 hours (with a brief stop at a rest station half way). We apparently hiked on “Mountain Day” which is a newer Japanese national holiday, and this was not planned and did cause some traffic. It was still dark when we arrived, and also pretty cold. The 5thstation “village” store was open, so we were able to purchase our Fuji hiking sticks and oxygen cans. At 5:30 am, we finally began the hike. About 1 km in, there is an overlook, and with the sun just starting to rise, the opportunity to take pictures was AMAZING.

Our tour group was going to hike the Yoshida trail in one day, so we had to keep a pretty steady pace. I was super worried about getting altitude sickness, so I stopped at almost every landing to take 5-10 deep breaths. I know this annoyed Andrew because he was worried we weren’t going to make it to the summit in time, but later he told me he regretted not doing the same. My thinking was that I would rather get to the summit and have to turn immediately around, then not make it at all. Going slow also meant that I didn’t need the oxygen, but it was nice to have as an insurance policy.

Because I took it slow at the beginning I felt great the whole way up. As soon as I got to a station I would sit down to take a break and a few minutes later when Andrew would join me, I would take the hiking stick to get stamped. When that was done we would start again. During two of these breaks I ate snacks and at every break I drank water.

We reached the summit around 12:15 pm and after taking a few pictures, we went to eat in one of the little “restaurants”. I had ramen and Andrew had udon. The food is definitely expensive for what it is worth, but it’s nice to have a hot meal after using so much energy. After eating, we walked around a little bit and took more pictures. The clouds were pretty thick, so you couldn’t see down the mountain, but it was still breathtaking. As soon as we finished taking pictures and started to gather our gear, I realized we weren’t done. I obviously knew we were at the top of the mountain, but I was mentally exhausted and knowing that I had a 2-4-hour hike down felt too much.

While talking with others at the summit, we had been told that running down the mountain is the best way to go down. It puts less train on your knees and gets you down faster. We decided to try this approach and I’m so glad we did. It took us 2 hours to get back to the 5thstation and because the fog and clouds were so thick, we didn’t really miss anything by not taking our time on the descent.

During our hike down the mountain, I found a wallet with money, an ID, and credit cards, so when we reached the 5thstation we went into the information building to turn in the wallet. They actually had us file a police report, and this process took about 20 minutes. Although I was exhausted I really appreciated how much time they took with us. They wanted to know exactly where it was found and let us know what the process of filing a police report would be.

After we left the police station we went back to the bus to grab our change of clothes. To be honest I have no idea if changing clothes was a good idea. We smelled AWFUL, but because I had forgotten to bring wipes and the public restrooms at the 5thstation weren’t very clean, it seemed to be more trouble than it was worth.

Once everyone in our tour was back on the bus, we headed back to Tokyo. It took about 3 hours to get back to our hotel, but not having to drive or worry about transportation was wonderful. I can’t imagine navigating transportation after such a physically and mentally draining experience.

Overall, I couldn’t have asked for a better Fuji experience. We were both able to summit and we didn’t have to deal with bad weather conditions. Not everyone is so lucky, so I am definitely counting my blessings. I’m not sure that it is an experience I’m ready to repeat right away, but I’m grateful to cross it off my bucket list.